there are several type of cookies that u can choose.. just show them which one u want , and for sure they will pack for ya.. but u have to PAY for it~ :D..

Wally Amos, an Air Force veteran who worked as a talent agent with the William Morris Agency, would send home-baked chocolate chip cookies to celebrities to entice them to meet with him and maybe sign a deal to be represented by the William Morris company.

On March 10, 1975, Amos took the advice of some friends and opened a cookie store in Los Angeles, California; the store was named "Famous Amos".

The store proved so popular that eventually, the "Famous Amos" brand would branch out, starting the production of cookies to be sold at supermarkets, in a move that would later be emulated by other specialty stores, such as Baskin Robbins, T.G.I. Fridays, Starbucks, etc.

Brand familiarity with Famous Amos cookies received a boost when the cookies, and their maker, were prominently featured in an episode of the television sitcom Taxi (Season 3, episode #55, February 5, 1981). In the episode, entitled "Latka's Cookies," Sunshine Cab Company mechanic Latka Gravas strives to become a famous cookie mogul like his idol, Famous Amos. Latka's cookies, however, contain a narcotic ingredient that makes the nearly inedible cookies (based on his grandmother's secret recipe) addictive. Cookie maker Wally Amos appears to Latka in a vision. It was, at the time, an unparalleled instance of product placement for a prime-time television show.

The Famous Amos brand has gone through a number of owners since inception. Between 1985 and 1989, the Famous Amos company went through four different owners. In 1992 the President Baking Company purchased the brand from the Shansby Group. Then, in 1998 Keebler foods purchased the President Baking Company. It was then owned by Keebler Foods until the Kellogg Company purchased Keebler in 2001. The brand is now a part of Kellogg's 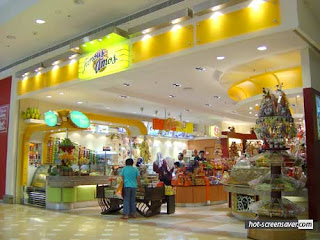 Some Famous Amos stores were sold and operate under a different name due to the brand issues. In Hong Kong, a shop in New Town Plaza, Shatin is operating under 'Cookies Plus' as opposed to Famous Amos, but the style of cookies is very similar.

Today, there is a sign commemorating the first Famous Amos store in Los Angeles, located at West Sunset Boulevard and North Formosa Avenue in Hollywood.

The original package consisted of a round, tin metal box, similar to the blue packages of a European brand of cookies, except that Famous Amos' package was white, and with a photo of what seemed to be a large chocolate chip cookie spinning on Wally Amos' finger. Amos himself was pictured on these packages, wearing his trademark straw hat and cotton shirt. 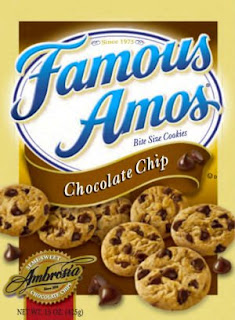 The original package consisted of a round, tin metal box, similar to the blue packages of a European brand of cookies, except that Famous Amos' package was white, and with a photo of what seemed to be a large chocolate chip cookie spinning on Wally Amos' finger. Amos himself was pictured on these packages, wearing his trademark straw hat and cotton shirt.[3] The 1980s packages consisted of small plastic bags that resembled the larger bags of the same material used by supermarkets during that period.

They had the brand's name inscribed in small letters, and once again, with a photo of Amos apparently spinning a large chocolate chip cookie on his finger, in a way that was similar to the basketball-spinning trick made famous by the Harlem Globetrotters.

The 1990s packages were much larger than those of the 1980s, with the name "Famous Amos" prominently displayed on the cover. These packages marked the end of Wally Amos' cover appearances, and featured a number of small cookies pictured instead, with a blue ribbon reading "chocolate chip".

The 2000s Famous Amos packages are very similar to the ones used during the 1990s, except for a couple of differences, such as the ribbon's color (almond has replaced blue). Part of Wally Amos' biography is featured on the back of the newest packages.

The design of the 2000s Famous Amos package does not have the biography on the back of the Not for Resale editions, or packages that come in large boxes or packs, usually found at Sam's Club and Costco.

Famous Amos. They stock all sorts of chocolates, cookies, and candies. 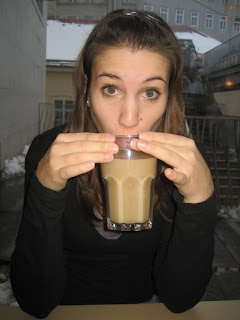